Well-developed infrastructure is a cornerstone for growth in every economy. It helps to create the right environment for governments and industry players to generate output that will lead to strong growth in GDP, and development of the economy during the different stages in the process of moving from developing to developed economic status. Whilst the huge investment in China's infrastructure is well documented and understood, there are many regions that still have much to do to improve the infrastructure within country and across their regions and sub-regions. India, Africa, Middle East, Southeast Asia, and Latin America are all regions that have ambitious plans for the continual improvement in infrastructure. Add to this the rapid urbanisation and transition to modern technology within the building materials segment, in developing economies on 5 continents and it becomes apparent that the construction industry can anticipate strong revenue streams going forward.

Turning specifically to China, Ipsos Business Consulting believes that the construction equipment market still offers global, regional and local players some interesting opportunities for growth. After a prolonged period of growth coinciding with China's entry on the global economic stage, the country's construction vehicles industry is experiencing a tough time. From a high of around 975,000 construction equipment (CE) units sold in China as recently as 2011, sales in 2015 were down to around 648,000. The decline continues to be felt across most of the industry despite China's plans to follow through on its highly ambitious One Belt One Road initiative, linking the country's infrastructure with economic centres in Europe, the Middle East and Africa.

China's overall slowdown in construction does not mean that investors should steer clear of the industry, however. Previous years' high-volume CE sales mean that a large proportion of China's active CE is either near or past the end of its warranty, opening up a potentially lucrative and long-lasting aftermarket for companies that organise their market strategies correctly. 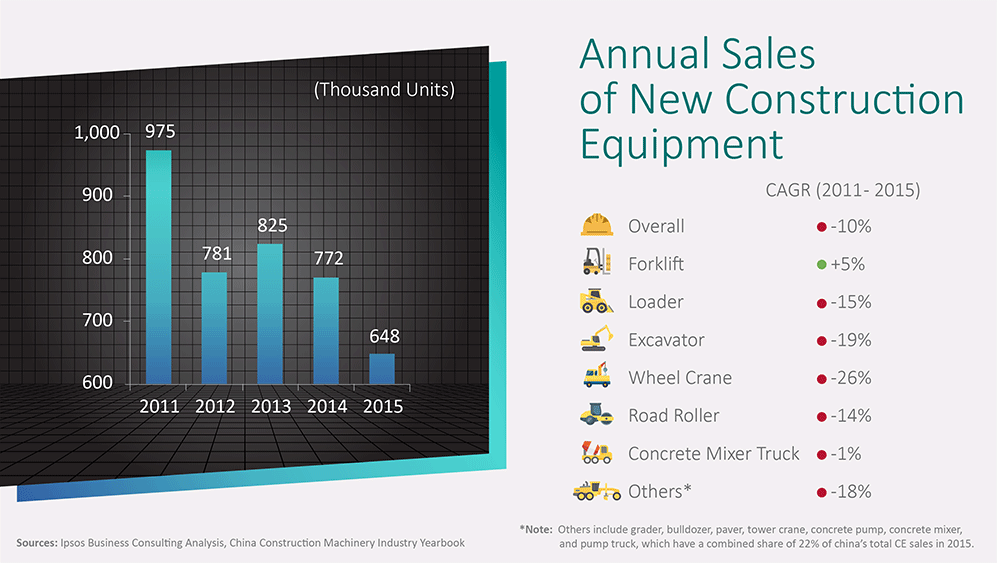 Get notified about leading edge industry articles, case studies, publications and much more!

Enable Push Notifications No, thanks